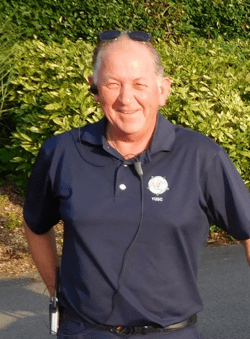 Philip started in golf as a junior in 1968 at Scarborough North Cliff GC and played to a good standard achieving a low handicap of 8. He served the committee of North Cliff from 1984 – 1997 during which he was appointed Captain in 1994.

Philip has always strived to improve junior golf not only at his own club, but throughout the East Riding Union and now with Yorkshire. He was appointed junior organiser at his club in the late 1980’s and only in 2020 did he retire from this position. Philip was very instrumental in adopting the Golf Foundation Passport scheme enabling the professional to operate during his academy coaching sessions. Many local juniors have benefited from his dedication including Iain Pyman (YUGC Amateur Champion, British Amateur Champion & Professional golfer) and Michael Petch ( USPGA Seniors Tour Director) to name a couple. In 2014 Philip was awarded the Sir Henry Cotton Award for meritorious service to junior golf from The Golf Foundation.

Philip continues in his role as Chairman with great enthusiasm and relishes in the challenges ahead. He would like to see junior golf numbers increase and appreciates there are many professionals and volunteers who are endeavouring to achieve the same, but understands it is an exceedingly difficult task. He was delighted for the Boys when they were crowned England Golf Boys County Champions in August 2017 & 2018, especially having come second in 2016, then losing out by half a point! In 2019 the Boys failed to qualify for the finals with our rivals from the red rose county, Lancashire taking the honours of representing the Northern Counties in the national final!

He would like to see Yorkshire consistently at the top, continuing in producing some first-class players and assisting in any way possible to promote junior golf. It is a shame that we have lost golf coverage to Sky and professional tournaments abroad, but there is some great golf to be seen at Amateur level. Please come along to spectate, the guys love it! You may even be watching the next Open or Masters Champion in a few years, for example Danny Willett and Matt Fitzpatrick; both were playing for the boys and men’s team less than 10 years ago. We currently have 13 boys now in the States on the US Golfing Scholarship with many performing exceptionally well in their endeavours to be better players and ultimately achieving their degree. The Walker Cup squad for 2021 has been announced which includes three Yorkshire players, Alex Fitzpatrick, Barclay Brown and Ben Schmidt, all recent Boys team players. I along with us all wish them well in attaining their call up to the GB& I team.

Q. When did you start playing golf?
A. I was 6 years old and first played at The Eagles Pitch and Put course adjacent to Boothferry Golf Club.

Q. Why did you choose golf above all other sports?
A. From the age of 5 I played a lot of football in the Hull Boys & District League for Howden Town and North Cave Tigers. I started playing golf with my Dad when he started and because the nearest course is only a few minutes from our home, we could go after school and weekends. When I was 13, I had to decide, football or golf! Football was too tying during winter with my Sundays always taken with matches leaving me no time for my golf. I chose golf and have never looked back.

Q. Where do you play your golf?
A. My home club is The Oaks, but I am also a member now of Selby, Ganton and Hornsea, all fantastic courses, but different in their own way. I live in East Yorkshire and love to play for the East Riding Union, both for the boys and mens teams. I have always tried to play in the biggest events I can, and have competed all over the UK, Spain, USA and Jakarta.

Q. When did you first represent Yorkshire?
A. I think I was 12 and played in the U14 section of an U16 Mixed Ages match against the Northern Federation Counties (Durham, Cumbria, Northumberland).

Q. Have you any notable achievements?
A. I won the U14 section of the North of England U16 Championships.
Was second in the US Kids European Championships (I lost out in a playoff) at The Glenn in Scotland.
North and East Yorkshire Schools Association U16s Boys Champion
I won the Alvin Trophy (U18 winner) in The Yorkshire Amateur 2020 at Lindrick GC
I have played in 4 World Championships.
Being selected to be Yorkshire Boys Captain tops all those events for me.

Q. Who is your personal coach?
A. Graham Walker. I have been with Graham for over 5 years and intend to stay with him. He has taught me a lot.

Q. What has been your lowest round to par and where?
A. I shot 5 under par at The Glenn in Scotland to lead the US Kids European Championships.

Q. Who is your golfing hero and why?
A. Tiger, mainly because of the way he dominated the sport and how he came back after injury was inspiring.

Q. Which is the best course you have played in Great Britain?
A. Ganton, if you can play well there you can play anywhere. The Mere in Manchester however is also special to me having won the European Junior Golf Tour Championship there twice!

Q. What is your goal in golf?
A. To be the best in the World and try have fun getting there
Short term, I would like to play for Yorkshire Mens and represent England.

Q. Finally, as Captain of the Yorkshire Boys’, what would you like to bring and achieve in your year?
A. To lead Yorkshire as the best and the smartest county for boys golf in the UK. To be a good role model to the younger players. Even if we do not win all the time, we will show good sportsmanship to our opponents.