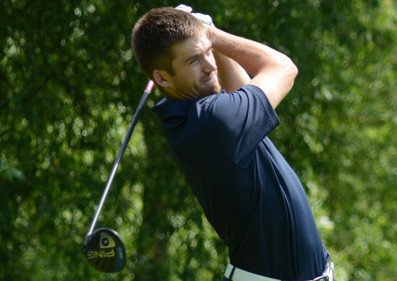 A strong field of players were at the magnificent Fulford Golf Club, for this year’s Amateur Championship.  An experimental format, in response to comments from players, was used, with the customary round of stroke play on each of the first two days, followed by two more rounds of strokeplay on day three for the best 40 plus ties.  After the first two days play, 41 golfers got through to the final day, with 153 strokes just getting in.  The leading score of 140 was from Ben Firth [Moortown], closely followed by Dan Wasteney [Bondhay] and Jamie Bower [Meltham] on 141, and with Julian Taylor [York], the defending Champion, two shots further back on 143.  With Julian and Jamie paired together, just in front on the final game of Ben and Dan, a tight finish was in prospect.  The morning round saw solid golf from these leading contenders; the best score being from Jamie, whose 70 gave him a 4 shot lead over Dan and Ben, with Julian one shot further back, tied on 216 with 3 others, including Jack Lampkin, whose 69 brought him into the reckoning.  The afternoon saw Julian on a charge, and, sadly, Ben falling adrift, so by the time the last game had crossed back over the bridge to the 14th, Jamie had only a two stroke lead over Julian and Dan.  This was halved when he had a bogie on the 15th, and it could have been less had Dan not missed a holeable putt on the 14th.  Jamie just missed a birdie on the 16th, where, a few minutes later, Dan could only make the par.  Both Jamie and Julian had fine birdies on the 17th, leaving Dan now 2 behind.  His tee shot on the 17th finishes too close to the large tree on the right, with no chance of going over it – his punched shot underneath has a soft bounce, and ends up in the stream, and his chance has gone.  Julian’s third to the 18th green finishes alongside the hole and he taps in for his birdie.  Jamie’s third, a putt from just off the green goes 5 feet past the hole, but his nerve holds, he sinks the putt for his birdie, and the Amateur title is his.
A new feature of this year’s competition was the introduction of an extra prize, the Inter-District Plate, awarded to the District Union with the lowest aggregate score from any two players over the first two rounds.  It was won for the Leeds & District Union, by Ben Firth and Phil Tomkinson [both of Moortown], with scores of 140 and 145.