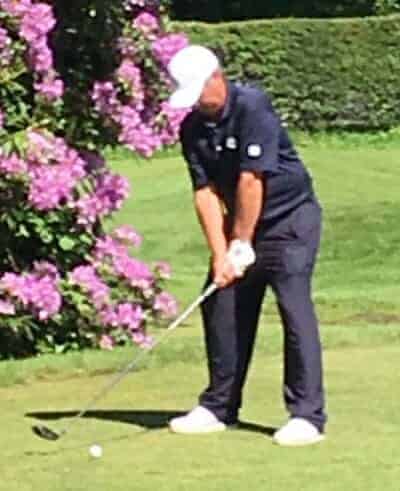 He triumphed in a play-off against Yorkshire’s Richard Jones (pictured), who had a birdie and an eagle in the last five holes to tie Attoe on two-under par for 54 holes.

Jones (Rotherham) had a putt to win outright on the 18th but, cruelly for him, it hit the hole and spun out.

In the play-off Attoe holed out calmly from 5ft for par to take the title, after Jones missed from a similar distance. “I am overjoyed to have won again and it’s most pleasing to do it away from my home course,” said the new champion, whose 2015 win was in his senior debut year and at his home club, Worplesdon.

The previous winning experience stood him in good stead. “I held myself together in the last round at Worplesdon and so I knew I could do it again,” said Attoe.

And when it came to the play-off he felt no nerves, because he’d already achieved his aim of a top five finish to support his ambition of returning to the England senior  team.

Attoe started the final round one off the lead, held by Jones, and enjoyed chasing, instead of protecting a lead. His main rival, throughout much of the round was Simon Ostrom (Rowlands Castle), who was playing in the event for the first time.

They jockeyed for the top spot, but Ostrom eventually dropped out of the reckoning with a bogey on 17 and had to settle for third place on level par.

Meanwhile Jones had apparently dropped out of contention only to roar back into the thick of things. He was three-under at the start of the round and promptly birdied the second. But his scoring knack deserted him in the middle of the round and he slipped back to one-over par after 11 holes.

However, his form returned on the back nine and he played himself right back into the title race with his birdie on 14 and eagle on 16, where he holed from 35ft.

But the title belonged to Attoe, who played steadily round in level par today, with one birdie and one bogey on each nine. “I played really nicely and, having been nervous yesterday, I was positive today.

“The scoreboard were very useful. I knew where I was and I knew what I needed to do and it spurred me on to hold steady,” he said.

Both Attoe and Jones win an exemption into the Seniors’ Amateur Championship at Royal Porthcawl from 1-3 August.