Boys come out on top against Northern Counties 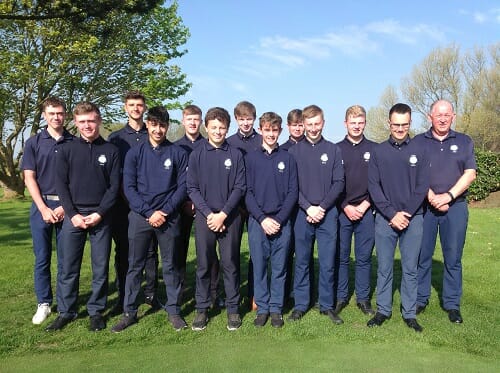 Phil Woodcock, Yorkshire Boys Manager had suggested the idea a year ago to the other three counties, where 4 boys representing each of their counties would compete against a 12 men team from Yorkshire. This was agreed by all parties and the match went ahead on Bank Holiday Monday in glorious sunshine with temperatures hitting 26C.

The standard of golf in the morning foursomes was extremely good on both sides with Yorkshire taking a lead 4 – 2 going into lunch. The highest handicap player in the teams was 3.

After lunch the good golf continued with some exceptional shots being played on both sides. An enthusiast crowd of supporters including parents, family, friends and officials followed the matches around the course with plenty of water being taken. The top game between Joe Robson and Jack Maxey was very competitive and went to the 17th hole with Jack taking it 2&1. In the second match Will Skipp from Durham was too great a match for George Robson winning 5&4. Josh Berry from Yorkshire their youngest player had a thrilling match switching back and forth between the two, but Josh finally succumbed to Will Wilkinson of Northumberland 2&1. The final result was 12 – 6 to Yorkshire, however this did not reflect the closeness of the games with three games going to the seventeenth and two to the eighteenth.

Overall the day was brilliant giving the boys from all four counties some good competitive golf played in the true spirit of the game.

Phil Woodcock commented: “This is a good result for Yorkshire, but more importantly I along with the other County organisers are delighted with the outcome of the day, this is a new fixture now in our diaries and we hope to take the match around the four counties giving the boys the opportunity of playing new and differing types of courses”.