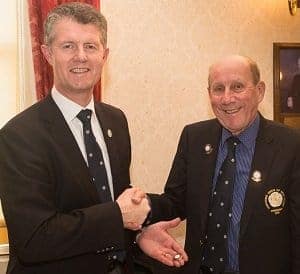 At the meeting Peter Finnegan handed over the reins to Jonathan Plaxton the 2016 Yorkshire Union of Golf Clubs President.

“Yorkshire enjoyed team success in 2015, winning The Northern League Title, and for the second year running produced The English Champion in Joe Dean. The Seniors Team made it to The Senior County Finals and with some very promising Boys in training for the 2016 season we have high hopes all around.

The Yorkshire County Golf Development Group and The England Golf County Development Officers are making good progress towards stemming the fall in club membership and attracting new players to the game.

A structured coaching programme by World Class Coaches continues to produce elite players. Recent graduates from Yorkshire to the Pro ranks including Danny Willett and Matt Fitzpatrick, both now ranked in The World’s top 50.

Thank you to all the clubs and their members who have given up their facilities during the year and to the volunteers who make the County fixtures run smoothly.

A new ‘grant’ initiative was announced at The Annual Council Meeting. This reflects the determination of The Union to work for the good of golf in Yorkshire and to help member clubs both retain existing golfers and attract new ones.

Having represented Yorkshire on the golf course (87 times) I look forward to representing The Yorkshire Union of Golf Clubs, during my term as President, with the same pride and commitment.

Have a successful, but most importantly an enjoyable, golfing year in 2016”