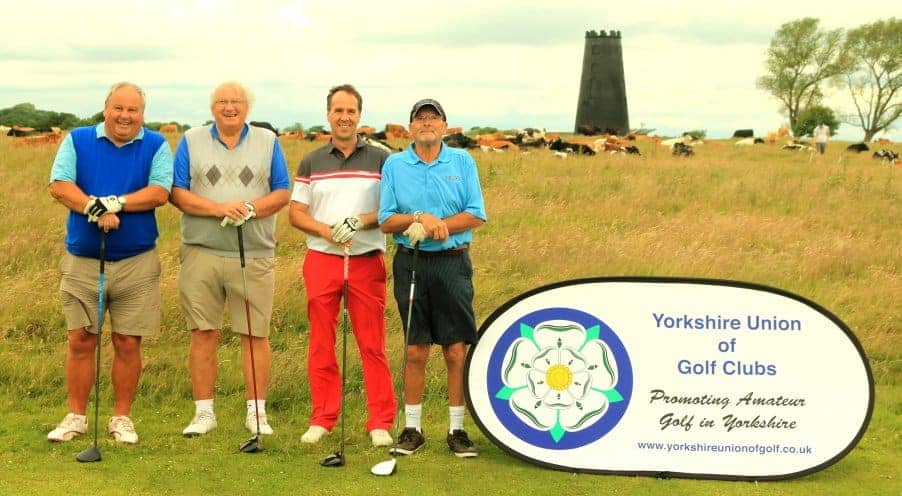 A Happy group on the first tee.

It was a cloudy, breezy, but warm day that greeted the County Members at Beverley and East Riding Golf Club on July 7th, for the first Summer meeting of 2016.

The recent damp mild weather had encouraged the rough to grow to intimidating proportions. This combined with the stiff breeze facing the players on the first tee induced some apprehensive looks.

The cows that share the course with the golfers did not seem bothered at all.

However, it was clear, by the excellent scores, returned that most players managed to keep their balls on the fairways.

There were 118 County Mmebers playing and 17 scores were equal to a better than 40 points, which is very creditable..

The first pair out at the start of the day were Messrs Makepeace and Cheeseman, from Hessle. They set a fantastic target for the rest of the field of 46 points, that was never going to be beaten. They managed to score 26 points on the back nine holes, with four birdies, which each attracted 4 points.

Two pairs came close, with 44 points each, but could not catch them.

Overall, 42 points was needed to finish in the prizes.

The Winners, Messrs Makepeace and Cheeseman being presented with their prizes by YUGC President, Jonathan Plaxton and Beverley Club Captain, Stephen Mooney

Their were many compliments from the County Members about how consistent and good the greens were.

The Beverely catering staff and Professional’s shop did a great job in supplying the needs of the County Members.

The President of the Yorkshire Union, Mr Jonathan Plaxton, presented the prizes and thanked Beverley & East Riding G.C. for an excellently prepared course, and thanked their members for allowing the YUGC to use their course.

The winners expressed their thanks for the excellent job that the Yorkshire Union do in running the County Member sevents.

The Beverley Captain, Mr Stephen Mooney, said how honoured and delighted the club were at being chosen as hosts by the Yorkshire Union.

You can see all of the results by clicking SUM1 Results

There are more pictures on the image slideshow below.